An excursion to the Monastery of Sant Pere de Rodes

The Benedictine monastery of Sant Pere de Rodes rises imposingly at an altitude of 520 meters in the Sierra de Rodes. From this point, the views of the bay of Port de la Selva and north of Cap de Creus are spectacular.

This building is of Romanesque architectural style and has more than a thousand years of history.

At the time, it was the most powerful monastery in the county of Empúries thanks to the donations of nobles and pilgrims, who came to the monastery to look at the relics that were kept there, which they said were exceptional.

Legend has it that the skull and right arm of St. Peter (hence the name of the monastery), sand from the Colosseum in Rome, or even a bottle of Christ’s blood were kept there. .

Its origin is not very clear. Some say it was founded by monks who landed in the area with the remains of St. Peter and others have other versions. What is 100% certain is that the first documentation of its existence dates from the year 878, and that it is not until the year 945 when it is considered an independent Benedictine monastery, ruled by an abbot. Linked to the county of Empúries, it reached its maximum splendor between the 11th and 12th centuries.

In 1930 it was declared a national monument and in 1935 the Generalitat de Catalunya began the first restorations.

Excursion to the Monastery of Sant Pere de Rodes

To get there, all you have to do is go to the Monastery car park and start walking along a stone path that is indicated. Do you dare to try it? Along the way you will enjoy some of the best views of the Costa Brava. Do not miss it! 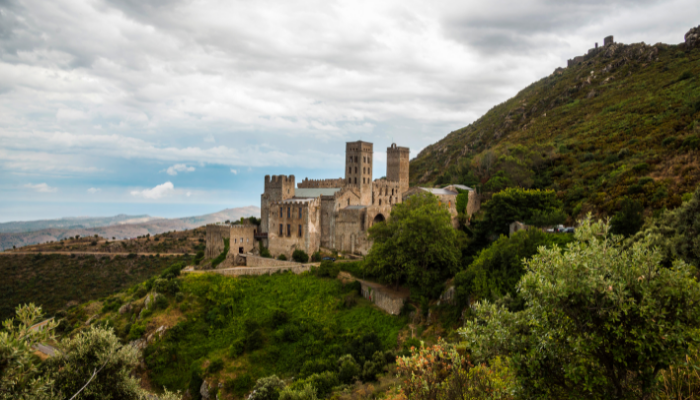